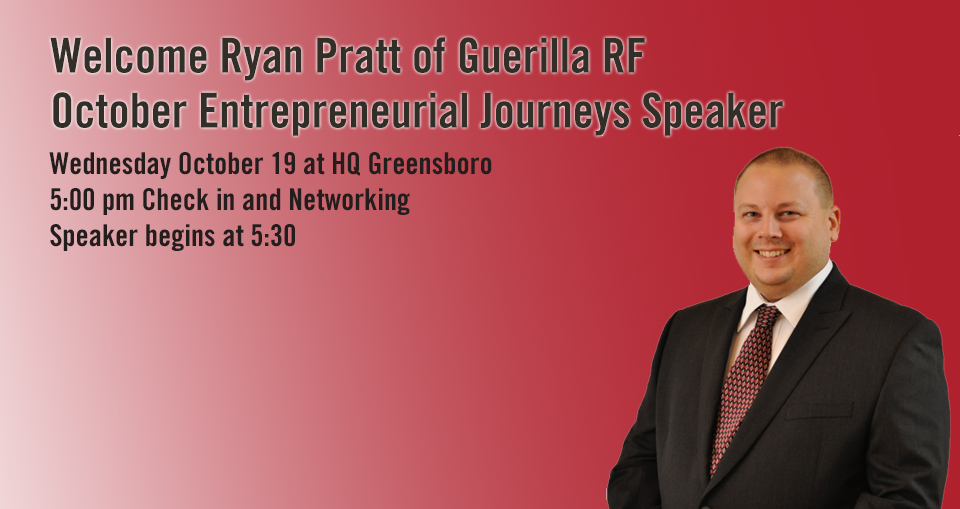 Written by Jan I Szelkowski on September 28, 2016. Posted in Events, free, Opportunities, Spotlight.

Ryan Pratt (Founder and CEO of Guerrilla RF) did not begin his career with the intent of creating his own business. After graduating from North Carolina State University in 2000 with a degree in Electrical Engineering, Ryan took a position at his father’s company, RF Micro Devices. Throughout the next eight years at the company, Ryan worked hard and moved his way up into the management team. However, in 2008, Ryan decided it was time for a change, and left RFMD to work for Skyworks, one of their competitors. In his new role, Ryan was given the opportunity to create and start a design center within the company, an experience he referred to as “a startup experience within a corporate umbrella”. Unfortunately, that experience ended in 2013 when he was laid off from the company.

The year that began with his lay off quickly turned into the year that Ryan created Guerrilla RF. Guerrilla RF is another semiconductor company, and their focus is on the infrastructure side (think of the big cell towers you see when you’re driving down the highway). They enable these infrastructure devices to cover a larger area, which means less towers covering more area. Their funding began with winning the NC IDEA grant, which Ryan said was the “make or break point for our company”.  With the grant money they received, Guerrilla RF was able to create their first prototype, which led to over a million dollars of investment money coming to fruition within three months. Investors are an important part of Ryan’s company, and he can’t stress enough that picking who you approach is important. “You need to find people who get what you’re doing, and you’re building a relationship where they trust you. If they don’t trust you, they’re the ones who are going to try to get overly involved in the business. In his case, his investors know very little about the industry, but they are aware of Ryan’s track record and they trust him to run it.”